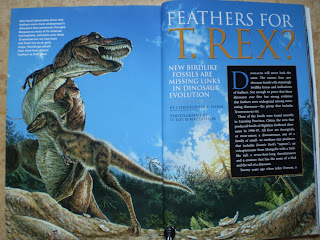 In November 1999 National Geographic announced the discovery of Archaeoraptor liaoningensis, a supposed transitional form between dinosaurs and birds. It became known as the Piltdown bird, one of the greatest hoaxes in science of all time.


To mark April Fool’s Day, National Geographic published the images of four of the most famous hoaxes in science. The choice of items in the collection speaks volumes of the gullibility of evolutionists. Three of them were supposed transitional forms: Piltdown man, Archaeoraptor liaoningensis and bigfoot (an imaginery apeman).

Archaeoraptor liaoningensis is National Geographic’s own production, so to speak. In 1999 the magazine published an article about a feathered dinosaur found in China but had to retrace it the following year since the creature was found to be a hoax.

Archaeoraptor turned out to be a veritable Piltdown bird. The Chinese fossil hunters had combined parts of different species to form a new “transitional fossil” that quickly made news headlines.