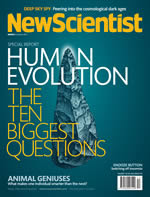 
Last week, New Scientist magazine focused on God and religion. This week, it examines ten of the biggest problems for human evolution.

While New Scientist is not about to endorse creation or even intelligent design, a survey of the problems of evolution is a welcome innovation.

The puzzles include the following:

· Why aren't we more like chimps?
· Why did we become bipedal?
· When did language evolve?
· Why are our brains so big?
· Why did we lose our fur?

The Genesis-based creation model would explain these questions much better than Darwinism could. The obvious answer to each puzzle is that the basic assumptions of evolution are wrong. Man never shared a common ancestor with apes, never walked on four feet, never had small brains and never was hairy. Humans could speak from the very first day of their existence.

In contrast, Darwinian evolution has to rely on ever changing just-so stories in order to explain these puzzles.

Unfortunately, New Scientist repeats the old claim of the “little more than 1 per cent” genetic difference between chimpanzees and humans. The real difference is much greater. Moreover, only man was created in the image of God.