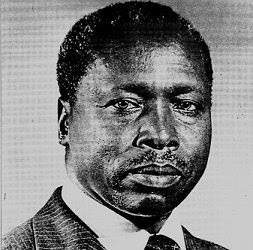 The portrait of Daniel arap Moi was once displayed in every governmental office in Kenya. Image courtesy of Wikipedia.

What do Charles Darwin, Jomo Kenyatta and Daniel arap Moi have in common? The connection is mostly ideological.

When Jomo Kenyatta was the president of Kenya, his portrait was displayed in every governmental office in the country, as though Big Brother was watching. The same custom of reminding the wanainchi or citizens of who is in charge continued during the presidency of his successor Daniel arap Moi, although these offices might have had nothing to do with the central government.

What has this to do with Charles Darwin? He is present (at least in spirit) in most science articles about human development although they might have nothing to do with evolution. For instance, a recent issue of New Scientist had two articles that reminded readers not to forget Uncle Charlie:

According to the magazine,

"Evolution is a powerful force - it has found many engineering solutions in our body."

” Indeed, the multiple roles of middle-aged people in human societies are so complex and intertwined, it could be argued that they are the most impressive living things yet produced by natural selection.”

The problem with this statement is that natural selection is not evolution. It cannot account for the arrival of species. It can only explain why a particular species or a variety of that species is suited for living in a particular environment (for instance, dogs with thick fur in a cold climate).

“Without the evolution of middle age, human life as we know it could never have existed.“

Darwin and evolution are totally unnecessary explanations. They hardly have anything to do with the subject matter of the articles. They seem to be added later so that no one might suspect that the writers are creationists or advocates of intelligent design.