Evolution Journal: The Genetic Difference Between Humans and Chimpanzees Is 23 Per Cent 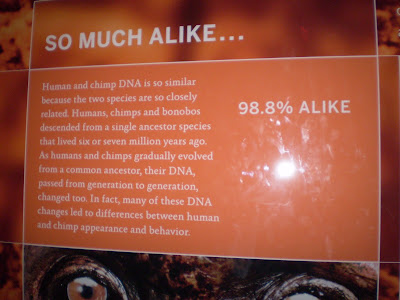 In April 2008 The American Museum of Natural History informed us that the genetic difference between humans and chimpanzees is 1.2 per cent. However, a paper published in 2007 already put the figure at 23 per cent.

Defenders of Darwinian evolution have been silent about a 2007 paper that put the genetic difference between humans and chimpanzees at 23 per cent. The comparative study by Ingo Ebersberger and colleagues was published in the journal Molecular Biology and Evolution.

I’ve been to natural history museums and read texts that emphasise the genetic similarities of humans and chimpanzees - in spite of the evidence. A few years ago, the American Museum of Natural History put the difference at 1.2 per cent although science publications had suggested far greater percentages.

Ebersberger and colleagues nonetheless tried to cling on to the idea of close genetic similarity between humans and chimpanzees although it is not at all difficult to conclude from their paper that Darwinian stories about the assumed human-ape pedigree cannot withstand critical analysis.

In 2010 the journal Nature published a contrastive study on the Y chromosomes of humans and chimpanzees. For evolutionists, the results were “horrendous”.