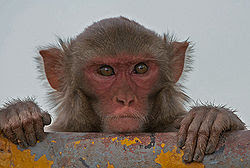 Recently, Nature news reported on an animal rights campaign that has almost halted all air transports of monkeys.

Very few commercial airliners are willing to carry macaques and other monkeys that are needed in medical research. Oxford University, for instance, has used macaques in research in order to find a cure for Parkinson’s disease.

The real victims in the campaign are humans suffering from diseases that as yet have no medical cure. The problem in animal activism is that humans are the ones who will ultimately suffer. This, however, does not seem to bother activists, who are most probably inspired by Darwinian evolution.