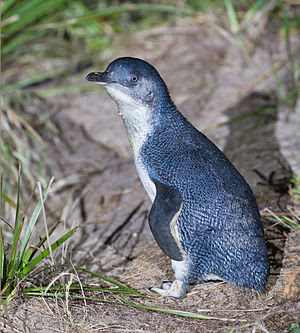 The apostle Paul said it first: “For since the creation of the world God’s invisible qualities—his eternal power and divine nature—have been clearly seen, being understood from what has been made” (Romans 1:20, NIV).

He was writing about design in nature.

Recently, the pro-evolution magazine Discover published a photo gallery of animals that use nanotechnology:

“Butterflies aren't the only animals who harness nanotech for cosmetic purposes; so do birds, whose dazzling array of colors comes from a combination of pigment-producing cells and nanoscale design.”

Yes, the text below the photo of a tiny penguin included the very word some evolutionists have banned from science publications - design. The magazine went on to say:

“In Australia and New Zealand, the little penguin Eudyptula minor sports a tuxedo of dark blue feathers instead of the more traditional (and formal) black. Last year, scientists at the University of Akron in Ohio used X-ray imaging and other techniques to discover that the penguins produce the blue color in an entirely new way: with bundles of parallel nanofibers, like handfuls of uncooked spaghetti, that scatter light so as to produce the rich blue. The 180-nanometer-wide fibers are made of beta-keratin, a protein similar to the one in human hair. Similar fibers had previously been found in some birds' blue skin, where they are made of collagen rather than keratin, but never before in blue feathers.”

We can see evidence of design everywhere – even in penguin feathers - if we are willing to have seeing eyes.