100 Years Ago: The Unsinkable Titanic Sank 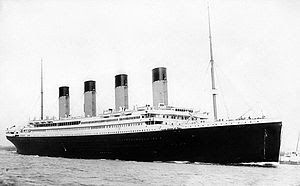 The early 1900s were characterised by great optimism. There was no shortage of new inventions and old ones were developed, to make them even better. People thought that society would keep on improving.

However, the times were not as golden as one might suppose. Social Darwinism, imperialism, racism and eugenics threw a dark shadow on life.

Titanic was characteristic of the spirit of the age. The press described the ship as unsinkable as its interior had been divided into sixteen compartments separated by watertight doors. The ship was expected to stay afloat for a long time even if one or two compartments would be damaged.

However, on its maiden voyage the Titanic struck an iceberg and sank on April 15th, 1912.

The tragedy of the Titanic tells us about the limitations of man.

It also shows us that we are no longer living in a perfect world but have to suffer from the consequences of the Fall.
Lähettänyt bwanajoe klo 06:28