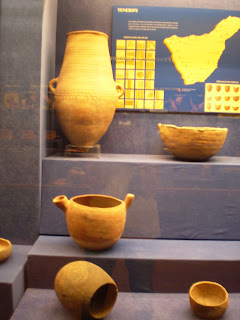 In the film One Million Years B.C. (1966) Raquel Welch wears leather bikinis. The clothes of Fred Flintstone were not exactly bright and glaring, either. Like film makers and cartoonists, many others have also assumed that stone age people wore drab animal skins.

However, Science recently suggested that this mistaken view deserves to be discarded since it stems from either a lack of knowledge or from persistent prejudice – or both.

Archaeologists found pink, black and turquoise fibres in the east European (or west Asian) republic of Georgia. They now believe that stone age people used them for making clothes. The finds were dated at 34, 000 years BP (before present). They are probably much younger since dating methods are notoriously unreliable.

The researchers found the flax fibers in a cave. They suggest that in addition to clothes, the people who lived there might also have used them to make ropes and baskets.

Living in caves does not necessarily mean that mankind’s history would stretch back hundreds of thousands or even a million years. The Bible tells us about Lot who lived in a cave with his daughters for a while after the destruction of Sodom and Gomorrah some 4,000 years ago.

For instance, caves are still used as houses in parts of the Canary Islands.

Our knowledge of stone age people has changed considerably during the past few years. We now know that they wore shoes, and made musical instruments , tools and weapons.

These discoveries do not support the Darwinian view of a gradual evolution from extremely primitive savages to sophisticated Facebook and Twitter users.

Ape-like cavemen who could barely utter a few monosyllables are figments of Darwinian imagination. The real early history of man can be read in the Book of Genesis.