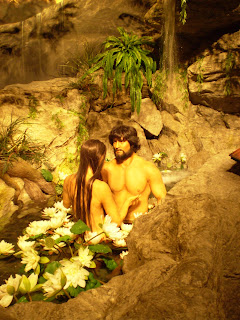 In 2003 belief in a literal Adam and a literal Eve most probably cost Raymond Damadian the Nobel Prize in Medicine. Image from the Answers in Genesis Creation Museum.

The Nobel Committee’s decision to grant this year’s Peace Prize to Barack Obama has given rise to much debate about the motives of the Nobel Committee and the political nature of the choice.

In addition, the names of some past Nobel laureates, such as Jasser Arafat and Al Gore, might suggest something about the speculative nature of the Peace Prize.

While Obama’s nomination was bizarre, it was by no means the first outlandish decision the Nobel Committee has made. At times, its choices have been anything but noble. In 2003 the Nobel Prize for Medicine was awarded to Paul Lauterbur and Sir Peter Mansfield for their breakthroughs in Magnetic Resonance Imaging ( MRI). However, Raymond Damadian, the pioneer of the field who invented the MRI scanner, was overlooked.

Michael Ruse, a Canadian philosopher of science known for his agnosticism, thinks that the Nobel Committee did not want to bestow the prize on Dr. Damadian since he is a creationist who believes that God took six days to create the world and that the flood of Noah’s day was a real historical event.

It seems that the Nobel Committee did not want to award a scientist who takes a critical view of Darwinian evolution.