The Spider That Eats Vegetables 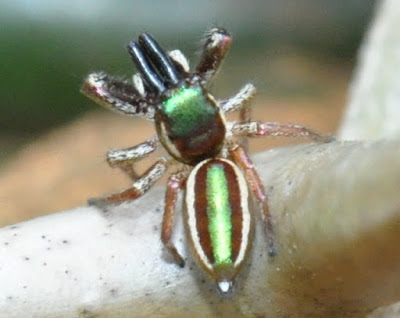 The diet of the Bagheera kiplingi does not match our assumptions of the culinary habits of spiders. We would expect it to use its web to capture insects. However, its favourite food consists of the tips of acacia leaflets.

The spider has got its name from the panther called Bagheera that Rudyard Kipling wrote about in his Jungle Book.

In 2007 Eric Olson and Christopher Meehan studied the Bagheera kiplingi in Mexico. To their surprise, they noticed that the spiders did not capture ants living in symbiosis with the acacias but they ate the nutritious Beltian bodies found at the tips of acacia leaflets.

For evolutionists, this was weird. However, seen from a creation aspect this is not at all surprising. The Book of Genesis states that in the beginning all animals were herbivorous, i.e., vegetarian, before the Fall brought death and suffering into the world.

Moreover, B. kiplingi is not the only ”weird” animal. At least one cat and two lions are known to have been vegetarians. This suggests that even animals that we would regard as predators do not necessarily need meat to survive.

Olson, Meehan and colleagues recently published their findings in the journal Current Biology. Scientific American, a popular magazine, also reported on the discovery.

Both publications were a bit late. In September, Dr. David Catchpoole, an Australian plant physiologist, already wrote an article in Creation magazine about the eating habits of B. kiplingi.