Science acknowledges: The scarcity of fossils has prompted artists to depict our forefathers as ape-like creatures 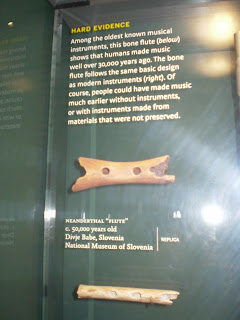 The belief in the ape-like traits of our supposed ancestors stems from assumptions based on an atheistic worldview. An ape will not make this kind of musical instruments.

Science publications and natural history museums often depict our assumed forefathers as hairy ape- like creatures. However, recently Science acknowledged that this is due to the scarcity of hominid fossils. Paleoartists have simply not known what our ancestors looked like. Their assumption led them to produce illustrations of creatures that looked somewhat like chimpanzees.

Recent finds have nevertheless caused artists to reassess their views.

Most of the evolution has occurred in the description of Neanderthal men. The earliest models described them as very ape-like creatures. But many fossil finds have shown that this assumption stems from the artist’s belief in Darwinian evolution.

In reality, Neanderthal men made musical instruments, produced effective weapons and buried the dead. These are not the characteristics of apes.

Michael Balter, who wrote the article on paleoartists in Science, thinks that their assumptions about our forefathers has also had an effect on how scientists have approached hominid fossils. This has resulted in a full circle.

In other words, ape-like creatures have been a figment of Darwinian imagination, a wish to promote the good news that we are not any more special than chimpanzees to all those who are not yet convinced of the "truth" of evolution (i.e. the majority of the earth’s human population).

Balter’s acknowledgement is welcome - although it comes a bit late.