Wish Upon a Moon 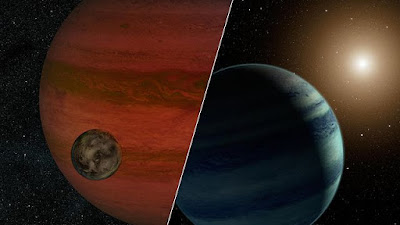 Exomoon or not? An artist’s impression of the MOA-2011-BLG-262 system. Image courtesy of NASA/JPL-Caltech.

The Moon is one of the things that make Earth a privileged planet. Writing in Nature, Robin Canup states:

“The Moon is large enough to stabilize our planet's rotation, holding Earth's polar axis steady to within a few degrees. Without it, the current Earth's tilt would vary chaotically by tens of degrees.”

The Moon’s size and distance from Earth determine how big tides we have. Without tides marine life would sooner or later come to an end, and our planet could turn into Mars’ twin.

In other words, the Moon looks designed to maintain life on Earth.

The origin of the Moon is a naturalistic dilemma.

New Scientist reports on a naturalistic scenario that has exomoons wandering all over the universe.

There is scant evidence for the existence of even a single exomoon, but why would they let facts spoil a good naturalistic hypothesis?

Wenz, John. 2017The universe may be full of ex-moons flung from their homeworlds New Scientist (26 December).