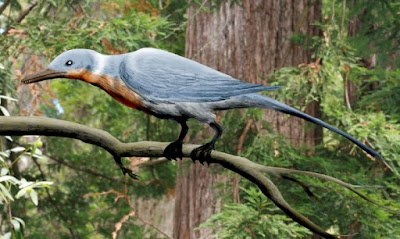 A sparrow-sized dino-era bird found in the Liaoning Province in China could most probably see in colour.

“An analysis of the 120-million-year-old bird revealed that the creature's eye tissues — more specially, its rods and cones — had fossilized in remarkable condition,” an article on Live Science suggests.

What is more, the “oil droplets were similar in size to those seen in living birds,” i.e. no evolution has occurred in “120 million years,” prompting Baochun Zhou, an associate professor of paleontology at the Shanghai Natural History Museum, to say the discovery "indicates that the complex optical system of cone cells had already been achieved by 120 million years ago."

There are serious problems with radiometric dating, so it might be wise not to be too dogmatic about dates that go into millions of years.

Some dino-age birds looked like today’s birds, and previous research has shown that an early bird preened its feathers, just like modern ones.