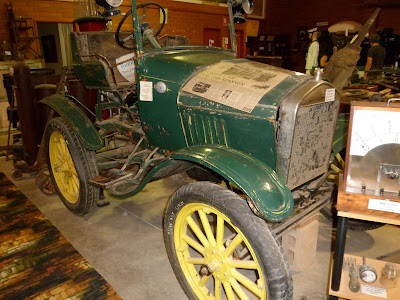 This museum specimen did not evolve through a Darwinian pathway.

An article recently posted in the UCLA Newsroom suggests that we can use evolution to explain “the ‘births’ and ‘deaths’ of every American-made car and truck model from 1896 to 2014.”

The researchers invoke the fossil record to make their case:

However, the thinking behind the two approaches is diametrically different. Whereas Darwinian evolution is supposed to have no ultimate goal or direction, with natural selection acting on random mutations to come upon a solution of sorts, each car make and model was designed by human engineers, who used their intelligence in the task.

One of the things that evolution does not do is designing.

With the passing of years, the cars looked different, as engineers found new ways of improving them, for instance.

Things change, but calling it evolution is a gross misuse of the E-word.

Evolution is without doubt one of the most misused of all words, due to its variety of meanings. And all too often Darwinists tend to muddy the waters and use different definitions of evolution in the same article.