Jumping Genes and “Alien DNA”: The Octopus Is Clever and Weird 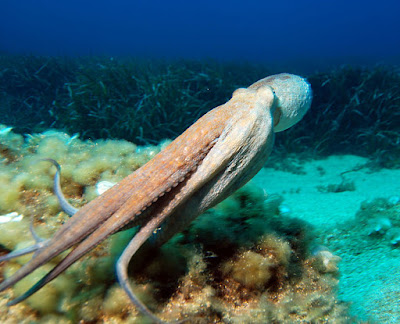 When describing the octopus, journalists tend to run out of superlatives. A writer in Nature described it as an eight-legged marvel and another used the expressions octopus ballet and uncanny intelligence.

Few animals can match its intelligence.

And its genome is also full of surprises. When researchers sequenced its genome they found that the octopus has more protein-coding genes (33,000) than we do.

Popular science websites concocted intriguing headlines from the octopus genome. Some suggested that the octopus had alien DNA or at least weird DNA and that it was not of this world at all.

The genome abounds in transposons or transposable elements (TEs). Also known as jumping genes, they can move from one place to another within the genome.

Jumping genes move about in the part of the genome once dismissed as junk.

Now we know that it was a misnomer and it has important regulatory functions.

And octopuses are living fossils that have hardly changed in “95 million years”.