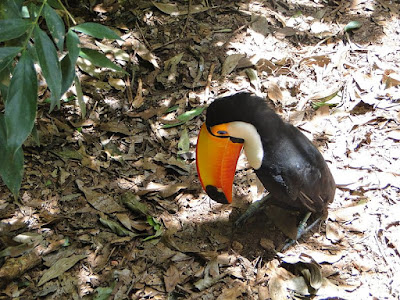 The toco toucan (Ramphastos toco) has an enormous beak, roughly one-third of its total length. Evolutionists have proposed at least two explanations for this:

Charles Darwin thought its size could be explained by sexual selection.

Latter-day evolutionists assumed that the bird ate fish because its beak looked like it did.

However, both guesses were as wrong as wrong could be. Many animals that look carnivorous actually eat vegetables or fruit.

And Moschus cupreus, a sabre-toothed mammal that still lives in Afghanistan, is not a predator.

A paper in Science suggests that the toucan’s beak

“serves primarily as a thermoregulator. Infrared thermography techniques, which allow detailed observations with minimal disturbance to the birds, show that the birds alter blood flow to the bill according to ambient conditions, effectively using it as a radiator to ‘dump heat’.”

The abstract gives some details:

“The toco toucan (Ramphastos toco), the largest member of the toucan family, possesses the largest beak relative to body size of all birds. This exaggerated feature has received various interpretations, from serving as a sexual ornament to being a refined adaptation for feeding. However, it is also a significant surface area for heat exchange. Here we show the remarkable capacity of the toco toucan to regulate heat distribution by modifying blood flow, using the bill as a transient thermal radiator. Our results indicate that the toucan's bill is, relative to its size, one of the largest thermal windows in the animal kingdom, rivaling elephants' ears in its ability to radiate body heat.”

This suggests a major dilemma for Darwinians: How many toucans perished during a heat wave before evolution found a cure through increasing the size of their beaks?