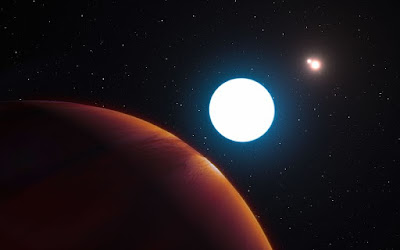 If you think that Earth is just an ordinary planet, or that our solar system is in no way special, you might want to think again.

While we keep on hearing of new exoplanet discoveries almost weekly, none of them resemble our just right blue planet.

Ours is a privileged world.

Astronomers have known for some years that many star systems are really weird. Hot Jupiters and Super Earths orbit systems that look anything but friendly.

Now it seems that some systems are really strange.

A report in Science says:

“Far-off solar systems keep getting weirder: Researchers have spotted a super-Jupiter orbiting a star in a three-sun system at a distance twice as far as Pluto is from our own sun. That makes the planet, dubbed HD 131399Ab … by far the widest ranging exoplanet in a multistar system, the scientists report online today in Science. Preliminary data suggest that the gas giant—about four times the mass of Jupiter—orbits the largest and brightest of the three stars (which has about 1.8 times the mass of our sun) once every 550 years or so. The other two suns in the system … smaller stars that orbit each other relatively tightly and quickly, lie somewhere between 45 billion and 60 billion kilometers away.”

Obviously, researchers do not expect to find little green men in these worlds – or creatures of any colour, for that matter.

“The intricate dance of the planet and these stars … is taking place about 320 light-years from us. Measurements at near-infrared wavelengths suggest that HD 131399Ab’s atmosphere contains water vapor and methane, and that the planet’s cloud tops are about 850 K (577°C).”

This odd star system is a major problem for naturalistic scenarios:

“It’s not exactly clear where this odd world formed, the team notes: It might have coalesced closer to the main star in the system and then migrated outward to its present locale, or it may have formed in orbit around the smaller pair of stars only to be ejected and then captured by the larger star.”

‘Exactly clear’ is an understatement. Some exoplanets are so weird that they have practically killed off all naturalistic planet formation theories.

But Earth seems to be fine-tuned for life.