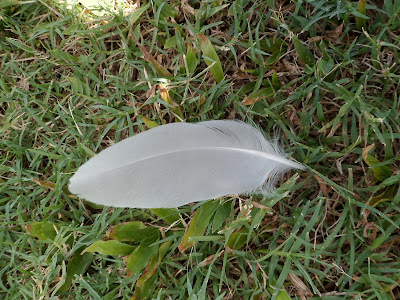 The ancient feathers look at lot like this one.

The little feathers trapped in amber are assumed to be almost 100 years old. Whereas New Scientist reports that they belonged to tiny flying dinosaurs, National Geographic is more forthright and acknowledges that what was found was dinosaur-era bird wings:

They sure look like bird wings with modern-looking feathers.

“Two tiny wings entombed in amber reveal that plumage (the layering, patterning, coloring, and arrangement of feathers) seen in birds today already existed in at least some of their predecessors nearly a hundred million years ago.”

But then NG couldn’t resist interpreting the finds from a philosophical perspective:

“A study of the mummified wings, published in the June 28 issue of Nature Communications and funded in part by the National Geographic Society's Expeditions Council, indicated they most likely belonged to enantiornithes, a group of avian dinosaurs that became extinct at the end of the Cretaceous period.”

Here’s the gist of the science part. It certainly does not suggest that the feathers came from dinosaurs:

“The two new samples, weighing in at only 0.06 and 0.3 ounces (1.6 and 8.51 grams), contain bone structure, tracts of feathers, and soft tissue. They are the first Cretaceous plumage samples to be studied that are not simply isolated feathers, according to study co-author Lida Xing of the China University of Geosciences.”

Soft tissue has also been found in Archaeopteryx feathers.

But NG goes on to say:

“Skin, muscle, claws, and feather shafts are visible in both samples, along with the remains of rows of primary asymmetrical flight feathers, secondary feathers, and covert feathers. All are similar in arrangement and microstructure to modern birds.”

Is there anything in the feathers that would suggest a dinosaur connection?

No. All the details point to a bird as the owner of these exquisite body parts. Darwinian evolution assumes that dinosaurs turned into birds, but given the enormous number of changes that would be needed in such a transformation, this scenario belongs to the realm of science fiction.