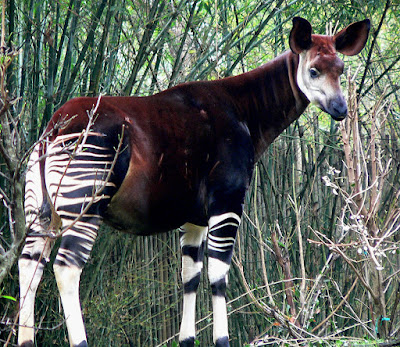 Charles Darwin and other evolutionists have made up fact-free stories about the assumed evolution of the giraffe’s long neck. What they have failed to notice, however, is that some animals, such as zebras and gazelles, tend to cope well on the savannah with their much shorter necks.

While the okapi (Okapia johnstoni) prefers to live in the rainforest, it is related to the giraffe. 1.5 metres (4.9 ft) tall at the shoulder, it has remained much smaller than its cousin and mostly unchanged for some “18 million years” and is thus assumed to be a living fossil.

Evolution is often defined as change over time, especially when its advocates want to advertise it as a viable theory, but in practice stasis or lack of change in often the norm, for instance in the red panda, nautilus, koala, or Gingko tree, to name only a few of the tens of living fossils found all over the world.