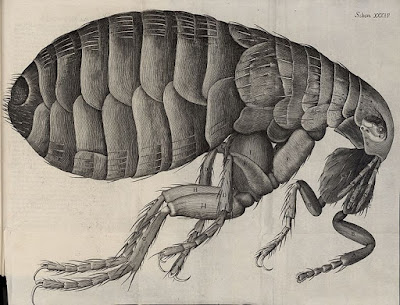 An illustration of a flea in Hooke’s book Micrographia. Image courtesy of the National Library of Wales, public domain.

In 1655 Robert Hooke’s book Micrographia made history. For the first time people could see what parasites, plants and small insects looked like.

Robert Hooke (1635 –1703) was one of the most important pioneers of modern science. A member of the Royal Society, he was a polymath who has been likened to Leonardo da Vinci.

“Robert Hooke was one of history’s most important scientists, coining the word ’cell’ and making profound contributions to timekeeping, astronomy, physics, and microscopy. He also argued, controversially in Micrographia, that fossils were the mineralized remains of ancient living organisms. We’ve learned a lot in the intervening centuries, but Hooke’s illustrations still inspire us to look closer.”

What the brief article in Science does not say is that Hooke gave glory to God. He was humble enough to acknowledge that seeing life through a microscope indicated that compared to us, the Maker of all living beings is really awesome:

““The more we magnify the object, the more excellencies and mysteries do appear; And the more we discover the imperfections of our senses, and the Omnipotency and Infinite perfections of the great Creator.”

Like many other pioneers of modern science, for instance, Sir Isaac Newton and Louis Pasteur, Hooke believed in God, who is introduced to us in the Book of Genesis.