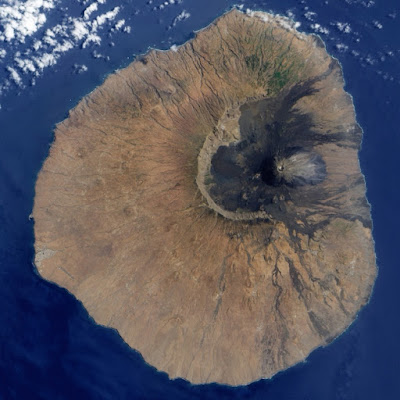 Looks like evidence for Noah’s Flood. Image courtesy of NASA.


A new report published in Science Advances looks at a mega-tsunami that was supposedly caused by a volcano in Cape Verde that partly crumbled into the ocean “some 73,000 years ago”.

It probably “generated an enormous wave that rose to 170 metres [550 feet] of height before it crashed into a nearby island,” a Nature news article states.

The Fogo tsunami, as it is called after the volcano that started it, also threw giant boulders onto land, some of them 200 metres or 650 feet above sea level.

The date was obtained by “measuring the amount of helium-3 on the boulder surfaces that have been exposed since the wave hit.”

However, radiometric dating relies on assumptions that cannot be tested. No one knows the initial amount of helium in the rock, for instance, or whether its escape rate was constant.

A more plausible explanation for the disaster is the global flood of Noah’s day roughly 4,500 years ago.

Fossil graveyards and many geological features, such as The Twelve Apostles, Heavitree Gap and Three Sisters, are best explained by the flood.

Jesus and the New Testament writers taught that it was a true historical event.