Have They Found the Fountains of the Great Deep Mentioned in Genesis? 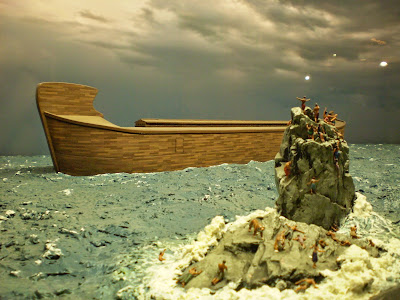 Genesis mentioned it first: there are massive amounts of water beneath Earth's surface that made it necessary for Noah to build a huge ark.


The book of Genesis speaks about the Fountains of the Great Deep that in Noah’s day contributed towards the global flood that destroyed the early Earth. (The NIV calls them the springs of the great deep.)

It now seems that a recent discovery confirms that there is in fact much water under us. A recent paper in Nature by Professor Graham Pearson and colleagues at the University of Alberta, Canada, found evidence of “massive amounts” of subterranean water.

What they actually found was ringwoodite, a mineral containing a “significant amount of water -- 1.5 per cent of its weight”:

“The first terrestrial discovery of ringwoodite confirms the presence of massive amounts of water 400 to 700 kilometers beneath Earth's surface. Ringwoodite is a form of the mineral peridot, believed to exist in large quantities under high pressures in the transition zone. Ringwoodite has been found in meteorites but, until now, no terrestrial sample has ever been unearthed because scientists haven't been able to conduct fieldwork at extreme depths.”

Seen from a Genesis perspective, the discovery is interesting. Moses was not writing fiction when he mentioned the Fountains of the Great Deep that ushered in the global flood in Noah’s day.