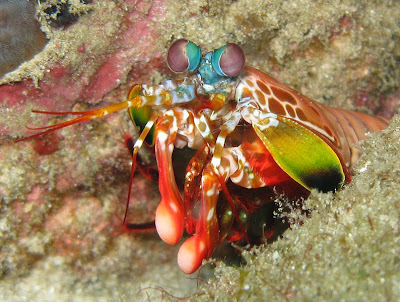 Intelligent design in nature is so evident that it is becoming increasingly difficult to deny it. In recent years, researchers have copied many amazing designs they have seen in the animal kingdom.

Biomimicry or the imitation of intelligent solutions seen in nature is a flourishing field of hi-tech engineering. Instead of relying on blind, purposeless Darwinian processes, researchers are looking at design features.

Recently, researchers drew inspiration from the mantis shrimp. According to a news release from the University of California, Riverside (UCR):

“Inspired by the fist-like club of a mantis shrimp, a team of researchers led by University of California, Riverside, in collaboration with University of Southern California and Purdue University, have developed a design structure for composite materials that is more impact resistant and tougher than the standard used in airplanes.”

The peacock mantis shrimp is a 10–15 cm (4–6 in.) -long “rainbow-colored crustacean with a fist-like club that accelerates underwater faster than a 22-calibur bullet. Researchers, led by [David] Kisailus, an associate professor of chemical engineering, are interested in the club because it can strike prey thousands of times without breaking.

The force created by the impact of the mantis shrimp’s club is more than 1,000 times its own weight. It’s so powerful that Kisailus needs to keep the animal in a special aquarium in his lab so it doesn’t break the glass.”

While deadly weapons speak of a fallen, groaning world, they nonetheless also indicate that intelligence was needed to produce them.

You can read about previous bio-inspired solutions here, here, here and here.