Cosmic Inflation: When Is Evidence Evidence? 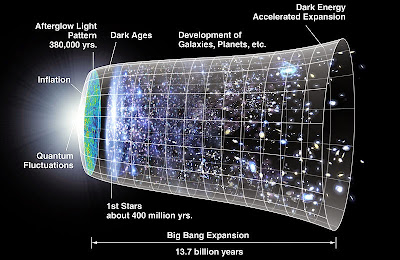 Evidence for this – or something else? Image courtesy of NASA/WMAP Science Team.


The Big Bang model has been struggling for decades. In 1980 Alan Guth invented inflation as an attempt to solve the horizon problem caused by the almost uniform temperature of the different parts of the universe.

If, as Big Bang advocates believe, the universe is 13.8 billion years old, then this is a huge problem. One edge of the universe would be 27.6 billion light years away from the other edge and there would not be enough time for the temperature to become uniform.

Reports of recent research claim that the Smoking Gun of the Big Bang has been found. According to a news in focus article in Nature:

“Astronomers have peered back to nearly the dawn of time and found what seems to be the long-sought ‘smoking gun’ for the theory that the Universe underwent a spurt of wrenching, exponential growth called inflation during the first tiny fraction of a second of its existence.

Using a radio telescope at the South Pole, the US-led team has detected the first evidence of primordial gravitational waves, ripples in space that inflation generated 13.8 billion years ago when the Universe first started to expand.”

The Nature article acknowledges that up to now “conclusive evidence for it [i.e., inflation] has been lacking.” It sees the discovery as a great breakthrough although the evidence could be interpreted in other ways as well.

However, this is not the first time that theory trumps evidence. Other astronomers are already calling for caution, as inflation is by no means the only possible explanation for what has been detected.

In a purely naturalistic /materialistic universe, there could be no cause for sudden inflation and no mechanism for slowing it down. In contrast, everything in the universe appears to be fine-tuned for life.

A much more plausible explanation begins with the words “In the beginning God created”.