Daddy Long Legs Forgot to Evolve for over “300 million Years” 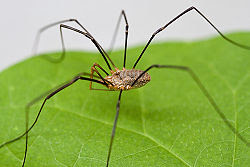 It is not difficult to guess where Daddy Long Legs gets its name. Image courtesy of Mehran Moghtadai, Wikipedia.

The list of animals that have not changed for assumed hundreds of millions of years is getting longer all the time. New 3-D model research of tiny fossilised Opiliones or harvestmen a.k.a daddy long legs reveals that they have scarcely changed in over 300 million years.

The research, conducted by an international team of scientists from Imperial College, London reported their findings recently in the journal Nature Communications.

It is becoming increasingly difficult to say that Darwinian evolution has mostly to do with change within species, from one kind of animal to another. The fossil record speaks primarily of stasis.