Atheists Offended by a Cross-Shaped Beam 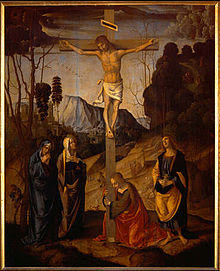 Marco Palmezzano: Crucifixion of Jesus of Nazareth (ca. 1490). Image courtesy of Wikipedia. The cross has been a source of controversy for two thousand years.

An atheistic organisation is suing the National September 11 Memorial and Museum because it displays a cross-shaped beam. To at least four American atheists, the object causes “dyspepsia, symptoms of depression, headaches, anxiety, and mental pain and anguish”.

That’s what they say, anyhow.

Jay Sekulow, chief counsel of the American Center for Law and Justice, says that the lawsuit is “bordering on the absurd.”

But perhaps we could ask why seeing a cross-shaped beam would cause these symptoms.

The cross caused controversies in the first century A.D. and obviously nothing has changed much.

Writing to the Corinthian church, the apostle Paul pointed out:

“For the message of the cross is foolishness to those who are perishing, but to us who are being saved it is the power of God.” (1 Cor. 1:18, NIV).

Why would something that they think is foolishness cause anxiety?

If we are logical, the cross is an affront to the atheistic worldview. Atheists claim that nothing made everything for no apparent reason and that we are the descendants of re-used pond scum.

In contrast, according to the Christian worldview we are made in God’s image. When Adam and Eve disobeyed God, sin and death entered the world – and thus the need for a Redeemer, who had to be like us, although sinless.

The cross speaks of the finished work of Christ. It shows that God is very much interested in humans.

No wonder atheists are offended by the sight of the cross.