Coelacanth – A Living Fossil That Lives Over A Hundred Years 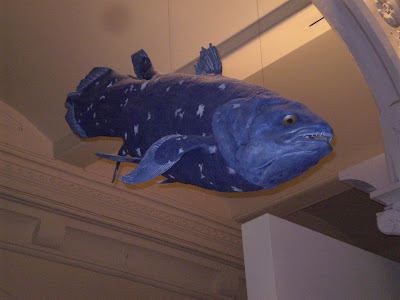 The Coelacanth Latimeria chalumnae is one of the best-known living fossils.

Darwinists used to believe that the Coelacanth Latimeria chalumnae lived during the era of the dinosaurs and became extinct some 65 million years ago. Yesteryear’s evolutionists thought it was a link between marine animals and land animals.

In 1938 the first living Coelacanth was found in the Indian Ocean. This changed Darwinian views to some extent.

Since then researchers have found several hundreds of living Coelacanths.

Hans Fricke and his colleagues studied the Coelacanths living in the waters near the Comoros islands in East Africa for 21 years using a submarine. Recently, they published a paper on their observations in the journal Marine Biology.

Fricke and colleagues think that some 300-400 Coelacanths live at a depth of 160-200 metres (525-650 feet). The researchers were able to identify over 140 of them. They noticed that very few fish were born each year and that about 4.4 per cent of the population died. However, approximately the same number of adult Coelacanths came to replace the dead ones.

On the basis of their observations Fricke and colleagues deduced that Coelacanths age very slowly and probably live for over a hundred years.

Evolutionists believe that the Latimeria chalumnae has hardly changed in 380 million years. It is one of the best-known living fossils.

According to the Darwinian story, much more should happen in 380 million years.