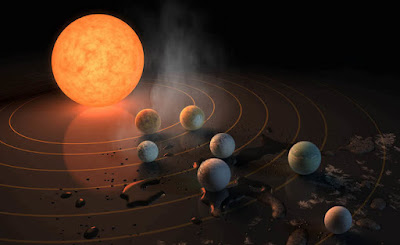 "Where is complex alien life hanging out in the universe? Likely not on planets stewing in toxic gases, according to a new study that dramatically reduces the number of worlds where scientists will have the best luck finding ET.

In the past, researchers defined the ‘habitable zone’ based on the distance between the planet and its star; planets that, like Earth, orbit at just the right distance to accommodate temperatures in which liquid water could exist on the planetary surface would be considered ‘habitable.’ But while this definition works for basic, single-celled microbes, it doesn't work for complex creatures, such as animals ranging from sponges to humans, the researchers said.

Under the new parameters, some stars have no safe-for-life zone; that includes Proxima Centauri and TRAPPIST-1, two of the sun's closest neighbors. That's because planets around these suns likely have high concentrations of carbon monoxide, the researchers said. Carbon monoxide can bind to hemoglobin in animal blood, and even small amounts of it can be deadly."

We have found 4,000 exoplanets but with (almost) no right for live. there’s not a single one we might call home.

Where did we get our phosphorus, that is vital for our DNA, RNA our ATP.

Our home planet has all these ingredients.

Geggel, Laura. 2019. Alien Life Could Be Hiding Out on Far Fewer Planets Than We Thought. Live Science (10 June).