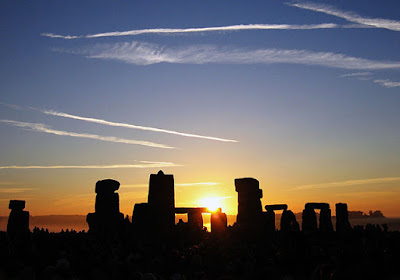 Could there be a link between Stonehenge and ancient astronomy? Image courtesy of Andrew Dunn, CC BY-SA 2.0.

Many people tend to think that ancient men could not have been as clever as we are. This is in keeping with the Darwinian idea that humans evolved very gradually from ape-like creatures and learning was a slow hit-or-miss affair. They were not expected to accomplish much intellectually.

However, the pyramids, Stonehenge and other ancient monuments and devices tell an entirely different kind of story.

In 2016 Science reported on the work of Mathieu Ossendrijver of Humboldt University in Berlin, who examined Babylonian clay tablets hailing from 350 BC to 50 BC.

Babylonian astronomers “also employed sophisticated geometric methods that foreshadow the development of calculus. Historians had thought such techniques did not emerge until more than 1400 years later, in 14th century Europe.”

Dr. Ossendrijver also published a report in Science entitled The Ancient Babylonian astronomers calculated Jupiter’s position from the area under a time-velocity graph.

The 2000-year old Antikythera Mechanism likewise challenges our views of ancient man. It is a multi-purpose calendar and computer. It could, among other things, be used to predict astronomical events such as solar eclipses and the timing of the Ancient Olympic Games.

A recent article in The Conversation examines the correlation of stars and ancient monuments and concludes that there might indeed be a link, but we cannot be sure of this.

Anyhow, even entirely oral cultures could have prodigious knowledge about constellations and stars.

In 2016 New Scientist wrote about Bill Yidumduma Harney, an Aboriginal Australian who could identify 3,000 stars in the night sky. How many astronomy professors could beat him in that game?

Brown, Daniel. 2018. From the pyramids to Stonehenge – were prehistoric people astronomers? The Conversation (12 March).