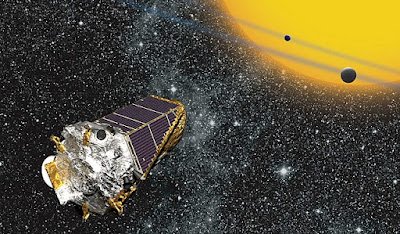 This time there’s less fanfare and speculation. Two papers published in the Astronomical Journal introduce us to 15 new exoplanets some 200 light years from us.

The post promising candidate is K2-155d that orbits a bright red dwarf. It obviously has a radius 1.6 times that of Earth’s.

Researchers think that K2-155d “could be a super-Earth located within the habitable zone,” as an article in International Business Times put it.

Once again, they are speculating about water, but there’s a big hitch.

" ‘In our simulations, the atmosphere and the composition of the planet were assumed to be Earth-like, and there's no guarantee that this is the case,’ Teruyuki Hirano, the lead researcher of the new study, from the Tokyo Institute of Technology, said in a statement.”

And then come the problems: Dwarf stars tend to be unstable and bombard their planets with intense solar flares.

These planets are probably tidally locked like Mercury in our solar system, with the same side always facing its sun.

It is very likely that this applies to the Trappist-1 system and to Proxima-b, and now we’ll probably have to add K2-155d to the list of has-beens.

What is more, getting from being habitable to actually having life is an enormous leap that naturalistic processes cannot pull off.

Life, as Louis Pasteur showed, only comes from life.