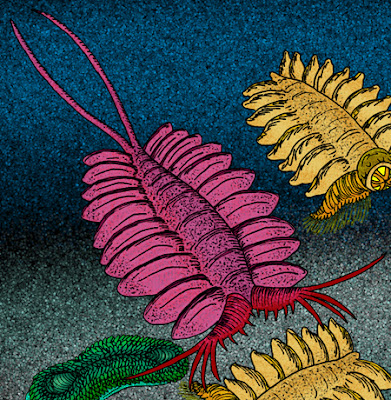 For Charles Darwin, the sudden appearance of complex animals in the Cambrian was a huge dilemma.

Cambrian creatures tend to be far too complex for evolution.

Some, like Chengjiangocaris kunmingensis, have a very complex brain. Science reported that a shrimp-like creature dubbed Fuxianhuia protensa “presumably did a fair amount of thinking.”

We can also see Darwin-defying diversity in Cambrian creatures.

Kerygmachela kierkegaardi is a 25 cm (10 in.) long “sea monster” found in Greenland.

Assumed to be “520 million years” old, it is “a bizarre, oval-shaped water beast that had two long appendages on its head, 11 swimming flaps on each side and a skinny tail,” Live Science quotes palaeontologist Jakob Vinther as saying.

The researchers also found 15 fossilized brains, which differed considerably from other Cambrian Era brains by being slightly less complex:

“An anatomical analysis showed that K. kierkegaardi's brain innervated the creature's large eyes and the frontal appendages it used to grasp its tasty victims, the researchers said.”

Darwinians could never have expected to see such diversity in Cambrian animals.