Smart Plants Use Clever Trick to Avoid Being Eaten 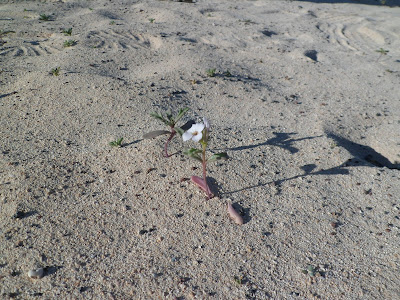 Sand keeps a plant from becoming a meal.

Plants are not stupid. That does not only mean turning towards the sun. They are masters of communication and cooperation. They also know how to defend themselves against insects and bigger predators that might otherwise eat them.

An article in Science says:

“Thorns, poisons, and partnerships with biting insects are just a few of the ways that plants avoid getting eaten. Now, researchers have added one more to the list: armor made of sand. Scientists have long wondered why some plants secrete sticky substances that trap sand on their stems and leaves. Over the years, they’ve floated ideas from temperature regulation to storm protection to armor against hungry herbivores.”

It turns out that plants were not doing this just for fun:

“To find out which is right, researchers removed sand grains from armor-wielding sand verbenas in California. After 2 months, the ‘naked’ plants had twice the chewing damage of plants that kept their sandy armor intact, the team reports this week in Ecology. The study also shows that herbivores were far less likely to chomp off the flowers of honey-scented pincushion plants when the researchers sprinkled some extra grains on the flowers. The key may be animal tooth care—an herbivore’s teeth are its most important tool, and anyone who has used sandpaper knows that grains of sand can wear down hard surfaces. Plants worldwide may be wielding a sandy shield to avoid becoming a meal, say the researchers, who add that the armor could still have other uses, like protection against sandstorms.”

This is exactly what we would expect in a world made by a benevolent Creator. In a world tarnished by sin, He has given plants the know-how so they can resist becoming the next meal of a hungry herbivore.

Plants are intelligent in other ways, also. Some of them are probably able to count.

God created plants to be “pleasing to the sight” (Genesis 2:9). Even in a fallen world, we can still see beauty in flowers and other plants. At least to some extent, this is based on mathematics.

Monahan, Patrick. 2016. Plants defend themselves with armor made of sand. Science (4 March).