Chimp ”Shrine” And the Assumed Evolution of Religion 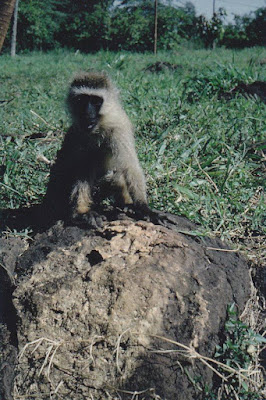 Animals are not known to worship God.

The naturalistic / materialistic worldview has no place for the supernatural or for the unique status of humans, and its adherents tend to believe that somewhere along the way, religion evolved because it helped our semi-human ancestors to survive.

Thus, when evolutionists heard that chimps were throwing rocks at a tree, some were ready to see this as a ritual, evidence of a mysterious shrine in a forest in Guinea.

Laura Kehoe, a PhD student at Humboldt University in Berlin, thought it might be a sacred tree. Daily Mail actually asked whether this was proof that chimps believed in God.

Fortunately, other researchers were able to take a more critical view of the chimps’ strange behaviour. However, this obviously did not stop them from speculating about the evolution of religion.

We should not forget, though, that only humans were made in God’s image. Belief in one God (monotheism) did not evolve. It was the original religion. And as far as we know, animals cannot worship the Creator.

Christ never died for animals. He died for us, the sons and daughters of Adam and Eve.

Barnes, Simon. 2016. Is this proof chimps believe in God? Scientists baffled by footage of primates throwing rocks and 'building shrines at sacred tree' for no reason. Daily Mail (4 March).

Hooper, Rowan. 2016. What do chimp ‘temples’ tell us about the evolution of religion? New Scientist (4 March).