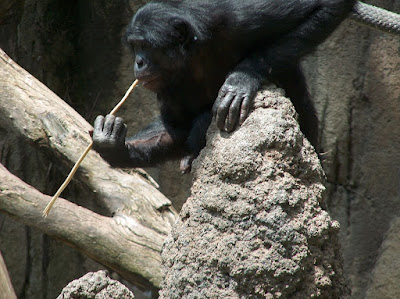 In the early 1980s, a male bonobo named Kanzi made headlines with its assumed linguistic skills. Coached from an early age by primatologist Sue Savage-Rumbaugh, the ape understood a wide variety of commands.

A new study throws some cold water on the enthusiasm. According to a report in the journal Science:

“But a new study reveals he may not be as brainy as scientists thought—at least when it comes to grammar. The original test consisted of 660 verbal commands, in English, that asked Kanzi to do things like ‘show me the hot water’ and ‘pour cold water in the potty.’ Overall, the ape did well, responding correctly 71.5% of the time (compared with 66.6% for an infant human). But when the researchers asked him to perform an action on more than one item, his performance plummeted to just 22.2%, according to the new analysis.”

“When he was asked to ‘give the lighter and the shoe to Rose,’ for example, he gave Rose the lighter, but no shoe. When asked to ‘give the water and the doggie to Rose,’ he gave her the toy dog, but no water. The cause? Animals like bonobos may have a harder time than humans in processing complex noun phrases like ‘water and doggie,’ linguist Robert Truswell of the University of Edinburgh reported in New Orleans, Louisiana, this week at the Evolution of Language conference.”

While we can teach animals to carry out easy tasks, it seems that grammar is beyond their comprehension:

“This feature of grammar—which effectively ‘nests’ one unit within the bigger construct of a sentence—is easily picked up by humans, allowing us to communicate—and understand—more complex ideas.”

This all highlights our uniqueness. Only humans were created in God’s image. While dogs can be cute and we can teach them to fetch the newspaper, for instance, a huge intellectual gap makes us distinct from all animals.

While evolutionary publications tend to see human traits in apes, much of the reporting is little more than pure speculation.

For Charles Darwin, the sudden appearance of language was a horrid doubt.

For Darwinists, language evolution has remained a big mystery that cannot be solved by storytelling.

Some researchers say that humans may be programmed to learn language.