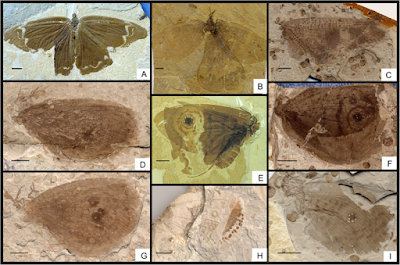 They look a lot like the ones we see today. Images courtesy of Qiang Yang, Yongjie Wang, Conrad C Labandeira, Chungkun Shih and Dong Ren, Creative Commons (CC BY 2.0).

There is very little new under the sun. We tend to get reminders of the stasis or lack of evolution in the animal kingdom almost weekly. The latest instalment features extremely well preserved fossilised dino-era lacewings that resemble modern butterflies though they are assumed to be at least “50 million years” older.

An article posted on Phys.org highlights the similarities:

“Large butterfly-like insects known as Kalligrammatid lacewings, which fluttered through Eurasian fern- and cycad-filled woodland during the Mesozoic Era, have been extinct for more than 120 million years. But with new fossil analyses, scientists at the Smithsonian's National Museum of Natural History have discovered that these ancient lacewings were surprisingly similar to modern butterflies, which did not appear on Earth for another 50 million years.”

The choice of some expressions like “strikingly similar” and “closely resemble” is particularly telling, as it calls evolutionary change into question:

“Through taxonomic, anatomical and geochemical studies, scientists led by Smithsonian paleoecologist Conrad Labandeira revealed that Kalligrammatid lacewings likely served as important pollinators during mid-Mesozoic times, using mouthparts that were strikingly similar to the elongated, tubular structures that modern butterflies have to sip nectar-like fluids from flowering plants. What's more, their wings bore eyespot patterns that closely resemble those found on some butterflies today, which may have helped to distract or deter potential predators.”

It is anything but easy to make a fossil, as very special circumstances are needed, such as a global flood with accompanying volcanism. And preserving tiny details for “120 million years” almost defies logic.

Evolutionists often try to invoke convergent evolution as an explanation of why distinct animals would have the same physical traits. In effect, it suggests that evolution does not work.

However, this obviously does not keep them from concocting evolutionary stories regardless of how unconvincing they might sound.