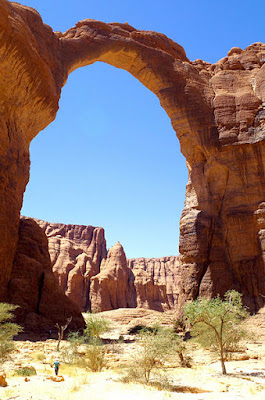 Can an enormous natural archway really withstand wind and other kinds of erosion for 65 – 2.5 million years?

That is what we are told.

But the obvious answer is that it cannot. Just remember what happened to some of the 12 Apostles in Australia: They went the way of London Bridge in the children’s song, tumbling down into the ocean.

New Scientist published a series of photographs taken by Stefan Kröpelin (University of Cologne) and his colleagues during their recent trip to the Sahara. The pictures suggest a more watery past for the now arid region.

Some geological formations, such as the Aloba Arch in Chad, look like they were formed by Noah’s Flood some 4,500 years ago.

Here are some other possible Flood monuments:

PS. Here’s a picture of a natural bridge assumed to be 500 million years old. The article is in Finnish, but the image will give you a good idea of this dilemma for believers in millions of years.