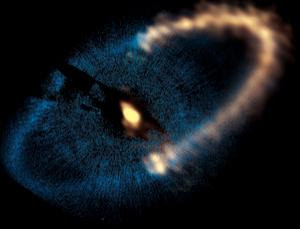 This bright object in the Fomalhaut system might not be a planet after all. Image courtesy of NRA/NSF/NASA.

Just a few days ago, an astrobiologist suggested that there were probably much fewer exoplanets in habitable zones around red dwarfs than previously assumed. Now, astronomers are writing off another candidate.

Wladimir Lyra of NASA's Jet Propulsion Laboratory and Marc Kuchner at NASA's Goddard Space Flight Center suggest that the bright object in the disc around the star Fomalhaut might not be a planet after all.

Like in the SETI programme, Darwinian assumptions are lurking in the background in the quest for other worlds. If life evolved through natural processes on Earth, the thinking goes, it should also have evolved on countless other planets.

However, it is an exceeding big if, as life only comes from life and life requires information. And information requires design.