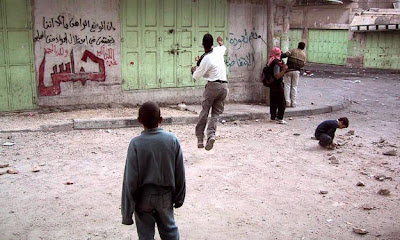 Palestinians have a history of protesting in ways that a recent EU statement would consider “non-violent”. Image courtesy of Wikipedia.

Palestinian activist Bassem Tamimi urged fellow-Palestinians to throw stones at Israeli settlers. When the European Union heard that an Israeli court would prosecute him, the spokesperson for High Representative Catherine Ashton issued a statement, saying that Bassem Tamimi and everyone else “should be able to exercise their legitimate right to protest in a non-violent manner."

If throwing stones is a “non-violent” way of protesting in Israel, might the EU also declare it to be so for instance in Brussels or London, when the stones are targeted at people, cars and windows?

Read more about the approach the western press and some leading politicians take to Israel here, here and here.

Statement by the Spokesperson of High Representative Catherine Ashton on the case of Bassem Tamimi.