Nobelist Ada Yonath: The Architecture of the Ribosome is Ingeniously Designed 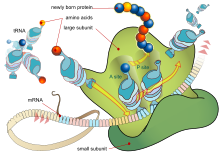 The ribosome. Image courtesy of Wikipedia.

The ribosome is tiny, measuring only 20 nanometres (a nanometre is one billionth of a metre), but without it there would be no protein synthesis and thus no life.

In 2009 three ribosome researchers shared the Nobel prize in Chemistry. Recently, Ada Yonath, who was one of them, repeated what she had said in her Nobel lecture:

”The architecture of the ribosome is ingeniously designed.”

Yonath is an evolutionist, but she cannot deny intelligent design.