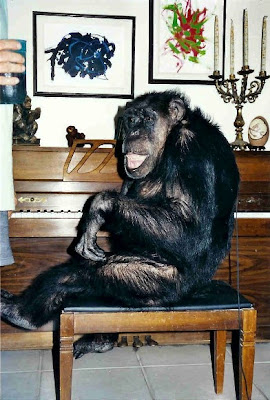 Last week brought us news about the demise of a chimpanzee named Cheetah at the age of 80. However, it was soon reported that this chimp was born long after the first Tarzan films were shot.

The real Cheetah starred alongside Johnny Weismuller and Maureen O’Sullivan in Tarzan films in the 1930s.

The media and science reporters are fond of ape tales but unfortunately we often can’t make head nor tail of their tall tales.

Recently, the journal Nature reported on Herbert Terrace, who in the 1970s tried to teach a chimpanzee named Nim Chimpsky to learn sign language. Nim learnt about 125 signs but unlike human children it failed to form logical sentences but merely combined signs haphazardly, for instance, ”eat – me –eat” or ”play – me – Nim”.

Terrace says that Nim aped signs to get rewards. The chimp tests turned out to big failures, as Nim was unable to learn properly. Finally it grew too big, and the tests had to be discontinued.

Evolutionists had hoped to prove that a chimp can learn to communicate but the case of Nim Chimpsky tells us that there is an enormous intellectual and linguistic gap between humans and chimpanzees.

Only humans, who are created in the image of God, are able to use language in a creative way.