Nature: Non-coding DNA is not junk 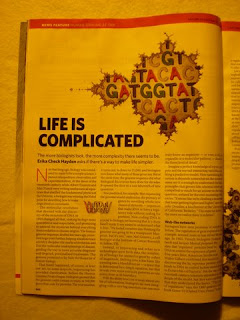 Nature has begun to see life as complicated.


Nature is not actually known for its love for creation of even for intelligent design. Recently, however, it almost digressed from the Darwinian path. Erika Check Hayden wrote,

"Biology's new glimpse at a universe of non-coding DNA — what used to be called 'junk' DNA — has been fascinating and befuddling. Researchers from an international collaborative project called the Encyclopedia of DNA Elements (ENCODE) showed that in a selected portion of the genome containing just a few per cent of protein-coding sequence, between 74% and 93% of DNA was transcribed into RNA."

In other words, non-coding DNA does not look like it is mere leftover from Darwinian evolution.

Like many other Darwinists, Richard Dawkins has used junk DNA as evidence for goo-to-you evolution but then he has never let the facts spoil a good theory.

In November 2003 Scientific American quoted DNA researcher Dr. John Mattick, who said: ”What was damned as junk because it was not understood may, in fact, turn out to be the very basis of human complexity.” Now Nature is basically saying the same.

3000 years ago, Israeli King David understood more about complexity than a 19th century Victorian gentleman who was much in the news last year. David said: ”I praise you because I am fearfully and wonderfully made; your works are wonderful, I know that full well.” (Psalm 139:14)