New research: An ape could not have left the Laetoli footprints 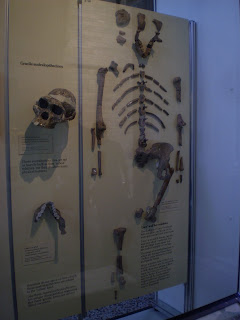 New research suggests that a being resembling modern man left the Laetoli footprints. Lucy could probably not make them.

In 1976 Mary Leakey found the footprints in Tanzania that are now pictured in most biology textbooks and major natural history museums. Their estimated age – 3,6 million years – makes them roughly as old as the famous Lucy or Australopithecus afarensis. They do not differ from the marks left by a barefooted H. sapiens.

Recently, David Raichlen, an associate professor at the University of Arizona, and colleagues examined how modern man walks barefooted on sand. They analysed the footprints left by eight human subjects walking on sand, and compared them with the Laetoli prints.

To the amazement of the researchers, the footprints did not differ essentially from the Laetoli prints. Lucy had the curved hands of an ape and probably also feet so the contribution of our grandmother to the prints is purely speculative.

Few people believe that H. sapiens walked on the Tanzanian savannahs 3. 6 million years ago. The dilemma can be solved if we keep in mind that radiometric dating methods do not measure that what we might assume them to measure, viz. time.

Instead, they measure the amounts or ratios of atoms or isotopes in a sample, and the date is computed on the basis of this. Errors of a few million years are not exactly rare.

Thus, a better explanation is that 1) the Laetoli footprints are human footprints and 2) they are not millions of years old.