Easter programme interprets the plagues of Egypt as natural catastrophes 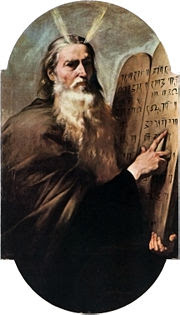 Jusepe de Ribero: Moses (1638). Image courtesy of Wikipedia. In the National Geographic version, Moses must have lived over 300 years.


Easter almost always inspires the media to invent naturalistic explanations for biblical miracles. While the hypotheses have often been intriguing, they have by no means been credible. The speculations included Jesus walking on an ice floe, Moses getting his visions under the influence of a psychoactive drug, and the discovery of Jesus’ ossuary or bone box.

This year, it’s the turn of Moses and the plagues of Egypt. A group of scientists suggest that they can be explained by natural causes.

National Geographic Channel produced a programme that explained the plagues as a series of natural catastrophes. The speculations began with the (assumed) balmy climate during the reign of Rameses II.

This was followed by sudden drought that brought Oscillatoria rubescens algae into the Nile. The water turned red (the first plague). The algae drove frogs onto dry land (the second plague), and when they died, gnats and flies flourished (the third and fourth plagues).

The insects spread diseases to both animals (the fifth plague) and humans (the sixth plague).

Next, the researchers had to resort to a volcano eruption on the Greek island of Thera (now known as Santorini) that caused sudden climate change and brought hail (the seventh plague), locusts (the eight plague) and darkness (the ninth plague). This part of the scenario is slightly more credible than the preceding elements.

National Geographic explains the final plague as a fungus that contaminated grain. The earliest grains were given to the firstborn who died first. There is no need for God or His judgements in this model.

Although God can use natural phenomena to judge nations and individuals, it is not plausible to explain away everything by appealing to naturalistic causes.

Furthermore, the NG scenario includes a minor miscalculation. The volcano on Thera erupted 300 years before the time of Rameses II who lived in the 13th century B. C. so in this version the most severe plagues came first and they must have continued for three centuries.

Moses must thus have been over 350 years old when he led the Israelites out of Egypt. According to the Old Testament, he died at the age of 120.

In the 18th century it became fashionable to doubt the Scriptures, but this often resulted in absurd explanations. Thus, for instance, Jesus was said to have walked on an ice floe on a lake that has never been known to freeze.

While NG’s Easter programme might be somewhat more credible than walking on ice in the sub-tropics, the Book of Exodus provides a much more logical explanation for what happened when God used Moses to liberate the Israelites from slavery and oppression that according to Exodus 12:40 had lasted for over four centuries.