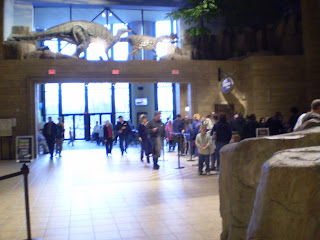 A new soft tissue find is good news for creationists. Hadrosaurs in the Answers in Genesis Creation Museum.

Science reported on a new discovery of soft tissue and collagen in Hadrosaur bone.

In 2006 a research group led by Mary Schweitzer of North Carolina State University found soft tissue and collagen in a Tyrannosaurus rex leg bone. The discovery gave rise to much debate as many scientists found it hard to believe that collagen and soft tissue could be preserved for 68 million years.

AAAS (the publisher of Science) chose an interesting approach in reporting the find in its newsletter This Week in Science. The title focused on the dinosaur – bird connection. It was a bit difficult to guess what the story was about without actually reading the text.

The find makes it almost impossible to believe that dinosaurs could have lived millions of years ago. This might be the reason why Science introduced the bird connection.

A more pertinent approach would have been questioning how soft tissues and collagen could possibly have been preserved for 80 million years.

Nature and New Scientist, however, were more transparent in their choices of titles.