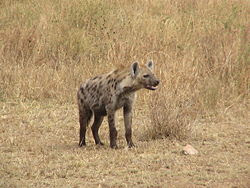 Old human hairs were found in hyena coprolite. But just how old are they? Image courtesy of Wikipedia.

A new study published in the Journal of Archaeological Science raises new questions about the reliability of the ages assigned to ancient human fossils. Dr. Lucinda Backwell of the University of Witwatersrand in Johannesburg, South Africa, and her colleagues found old human hairs in coprolite or fossilised dung in a cave used by hyenas.

They assume that the hairs are 200 000 years old, which would by far be the oldest discovery of its kind. According to Dr. Backwell, “This find is so unusual as the human fossil record at this time is exceedingly poor, and of course hair is relatively fragile and degrades easily. It is the first non-bony material in the early hominid fossil record.”

The width of the hairs matches that of modern humans and the shape is also similar. In other words, the find does not support Darwinian evolution.

Backwell and her colleagues think that the hairs belonged to either Homo heidelbergensis or to what are assumed to be the earliest Homo sapiens.

From a creationist perspective, the find is interesting. Is it really logical to believe that human hairs can last 200 000 years? Like the recent discovery of soft tissue and collagen in a Hadrosaur bone thought to be 80 million years old, it seems to stretch credulity past the breaking point.