Darwin and Augustine: Alister McGrath on The Days of Genesis 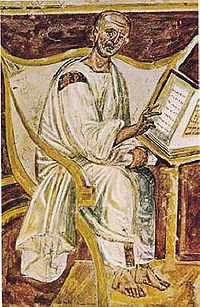 A 6th century painting of Augustine of Hippo. Image courtesy of Wikipedia.

Oxford professor Alister McGrath has often taken on atheists and especially on Richard Dawkins. He resists the Darwinists' insistence of using evolution to exclude the idea of a creator God.

In a recent Christianity Today article, McGrath discusses the views of Augustine of Hippo (354–430) in an attempt to explain the creation days of Genesis according to the theistic evolution model.

At the beginning of the article, McGrath states:

Many evangelicals fear that innovators and modernizers are abandoning the long Christian tradition of faithful biblical exegesis. They say the church has always treated the Creation accounts as straightforward histories of how everything came into being.

I would agree with professor McGrath. There is a real danger of mutilating Scripture by re-interpreting it so that it conforms to the interpretations of naturalistic science, i.e. evolution and millions of years of earth history.

Darwinian evolution is basically an atheistic explanation for the existence of life. No wonder Dawkins is fond of the idea.

It is a pity that McGrath does not realise his own inconsistency. Instead, he appeals to Augustine’s idea of the difference between instantaneous creation (Psalm 33:6–9) and a God who is still active within creation (John 5:17). McGrath uses this to argue that God could have chosen Darwinian evolution as His method of creation:

For Augustine, God created a universe that was deliberately designed to develop and evolve. The blueprint for that evolution is not arbitrary, but is programmed into the very fabric of creation. God's providence superintends the continuing unfolding of the created order.

McGrath then proposes to give nature the ability to create:

However, the Bible makes it clear that this has to do with “after its kind”. We cannot assume that Augustine was conferring to nature the ability to form new biblical kinds.

Later, McGrath states: “ The real issue here is not the authority of the Bible, but its right interpretation.”

Indeed. A careful exegesis of Genesis 1:1-2:4 shows that the author clearly meant the days as ordinary, 24-hour days. While Augustine’s view was not typical of the early church fathers he certainly did not advocate belief in millions of years of death and bloodshed as God’s method of creation. Augustine believed that God could have created the world instantly.

In sum: using Augustine to justify theistic evolution is evidence of poor logic.