Preservation of ”1.4-Million-Year-Old” Plankton DNA Is a Darwinian Mystery 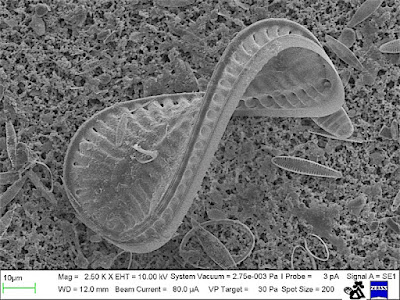 Plankton DNA in marine sediments should obviously decay with time and certainly not last for over a million years.

However, a recent paper published in the journal Geology reports on the discovery of traces of diatom DNA in samples dug up from the Bering Sea in sediments believed to be 1.4 million years old.

When it comes to plankton, diatoms are probably among the most picturesque and beautiful types, and even some evolutionists acknowledge that they look designed.

Younger sediments contained more DNA, but even the “1.4 million year old” layers had some DNA left.

While algae and other types of plankton are often featured in some Darwinian stories, this time the just so stories are conspicuous by their absence.

The researchers do not have a logical explanation for their findings:

“We do not know the mechanism behind the apparent relative slowdown of DNA degradation with age. Whether this decreased turnover is due to decreased lability of residual DNA, an overall decrease in enzyme activity, a decrease in spontaneous decay rates, or some combination of these and other factors remains presently unknown.”

Their discovery certainly calls into question the validity of radiometric dating and the very concept of millions of years.