Noah in Kentucky: Bill Nye Gets Distressed at Ark Encounter 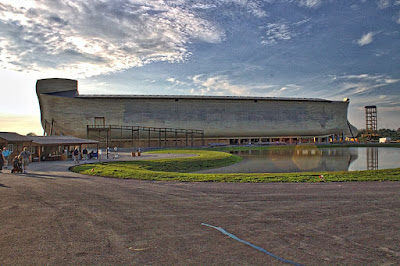 In May 2007, when Answers in Genesis (AiG) opened its Creation Museum in Kentucky, a group of atheists hired an aeroplane. Drawing a banner with the words “Thou shalt not lie,” the plane flew above the museum.

In July (2016), when AiG opened its Ark Encounter theme park to the public, Bill Nye, who debated Ken Ham at the Creation Museum in February 2014, was there to warn of the danger of brainwashing.

However, while Mr. Nye might not acknowledge it, most brainwashing tends to happen in secular venues where goo-to-you-evolution is taught as fact, regardless of the dire lack of evidence.

“The Science Guy” seems to detest all those who dare to question evolution.

The Ark Encounter features a huge replica of Noah’s Ark. Approximately 155 metres (510 feet) long, it could easily have fitted two animals of each biblical kind of land animal on board and kept them safe for a year.

Many secularists are worried. They seem to be wary of anything that promotes the biblical worldview, regardless of whether it has to do with statues, crucifixes or nativity scenes.

Noah’s Ark is described in the Bible. Jesus and the New Testament writers believed in its historicity. No wonder secularists are worried. It is a form of evangelism.

The Ark Encounter is not the only huge ark replica that has made headlines in recent years. Johan Huibers, a Dutch carpenter, has built two floating arks and some businessmen have constructed an ark of biblical proportions in Hong Kong.

You can read more about the AiG Ark in the Ark Encounter blog.