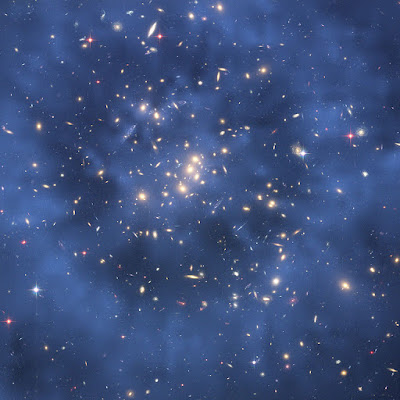 Dark energy and dark matter are supposed to account for over 95 per cent of the matter and energy in the universe. No one knows whether they actually exist, but Big Bang cosmology requires them.

Some astronomers think that it is time to get rid of dark energy, or the assumed 68 per cent. Thomas Buchert of the école Normale Supérieure in Lyon, France, predicts that in ten years' time, dark energy will be gone. He and other dissidents believe that it is an illusion “created by the machinery of the standard model [i.e. the Big Bang]”.

According to evolutionary logic, we are ultimately the products of a quantum fluctuation that occurred for no reason at all.

Evolutionist think that they are formed of stardust.

Cosmic inflation cannot salvage it as it lacks evidence.

No wonder some have proposed even weirder solutions, such as multiverses which belong to the realm of science fiction.

When one tries to explain away the amazing fine tuning that exists practically everywhere in the universe by invoking purely naturalistic causes or even luck, logic loses and the illogical sphere gets bigger.

Ananthaswamy, Anil. 2016. Dark energy must die – these rebel physicists can take it down. New Scientist (15 June).