New Evidence of Design: The Supernatural Nanostructure of Our Teeth 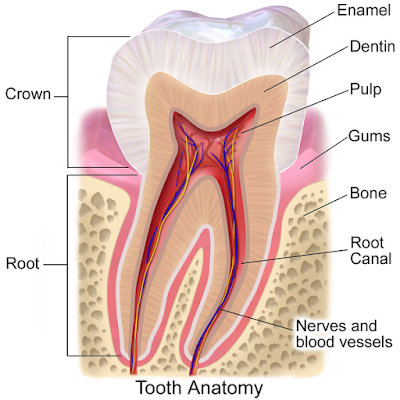 It has become increasingly difficult to credit evolution or naturalistic processes for the excellent design we see in us and other organisms.

A new paper published in the journal Chemistry of Materials on work by researchers at Charité – Universitätsmedizin Berlin examines the composition of dentin, the part of our teeth just below the enamel.

The institute issued a press release with the word 'super-natural' in the title (Dentin nanostructures – a super-natural phenomenon), and then went on to say:

“Dentin is one of the most durable biological materials in the human body. Researchers from Charité – Universitätsmedizin Berlin were able to show that the reason for this can be traced to its nanostructures and specifically to the interactions between the organic and inorganic components. Measurements performed at BESSYII, the Helmholtz-Zentrum Berlin's synchrotron radiation source, showed that it is the mechanical coupling between the collagen protein fibers and mineral nanoparticles which renders dentin capable of withstanding extreme forces.”

The press release did not attempt to entertain readers with a Darwinian pathway of how teeth evolved from non-teeth but instead stuck to facts:

“In humans, teeth come into contact almost 5,000 times per day under normal use. In spite of this, and although we often use large forces during mastication, it is surprisingly rare for healthy teeth to break.”

It does not shy away from using the word design:

“It is widely accepted that the design of teeth makes teeth tough, where an inner core, known as dentin, supports the outer hard enamel cap. The secret to the marked toughness lies in the structural details. Dentin is a bone-like substance, which is composed of mineral nanoparticles, collagen and water. While both enamel and dentine are composed of the same mineral called carbonated hydroxyapatite (cHAP), dentin represents a complex nanocomposite material. It consists of inorganic cHAP nanoparticles embedded in an organic matrix of collagen protein fibers. A group of researchers, led by Dr. Jean-Baptiste Forien and Dr. Paul Zaslansky from Charité's Julius Wolff Institute, had previously shown that residual stress in dentin contributes to the high load-bearing capacity of this biological structure.”

In other words, our teeth are amazingly well and meticulously designed to keep us living. Their strength is far more greater than one would expect in a Darwinian world that is obsessed with survival.

This research is bad news for evolutionists, as complexity does not just happen, evolution does not learn and does not design.